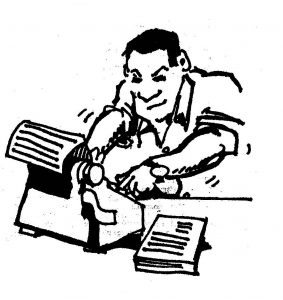 I was particularly pleased with the Ninth Circuit’s decision as the Dramatists Legal Defense Fund (DLDF) commissioned me to draft its Amicus Brief, with full support from Executive Director, Ralph Sevush, and additional comments by David Friedlander who submitted the brief on the DLDF’s behalf. The Amicus Brief argued that the plaintiff’s claims were barred by the principle of “Copyright Estoppel,” among other defenses.

Copyright Estoppel is the principle that an author cannot tout a manuscript as completely true, only to later claim, in litigation, that parts of the manuscript were made up and so are entitled to full copyright protection. My favorite example was found during research centered on The Book of Urantia, a work of ostensible spiritual wisdom channeled by the extraterrestrial beings of Urantia. The author promoted the book as not written by him, but by the aliens, with him as a mere, automatic scribe. When the author sued to prevent someone from printing an abstract, the court said he lacked standing, because he was not the author of the book — the aliens were.

Here, the facts were similar . . . in a legal sense, not an extraterrestrial one. The autobiography had been promoted to potential publishers as completely true, and the manuscript itself claimed that its contents were true. The argument of Copyright Estoppel in the DLDF’s brief was endorsed by the Ninth Circuit’s decision, finding that the plaintiff could not “explicitly represent its account as historically accurate, not historical fiction” only to sue later for including those historical facts in a subsequent work.