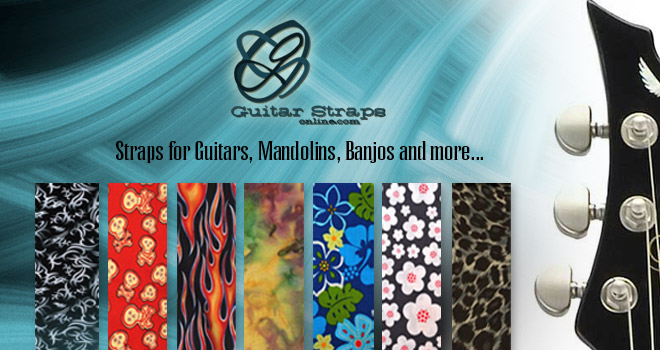 Whether a beginner checking yourself out in the mirror or a professional thrasher releasing concert footage, you can’t look your coolest unless you’ve got the proper shoulder strap for your guitar.  You’d be leaving coolness on the table, and that’s no way to rock.  So, along comes Guitar Straps Online, LLC (“Guitar Straps”): animal prints, flames, snakeskin, paisley, skulls; guitar, harp, dobro, bass; leather, embroidered, batik.  This business looked like it could provide virtually any strap for any stringed instrument, worldwide.  Could it be, though, that Guitar Straps went out of business due to a mere question mark?

Formed in April 2010, Guitar Straps filed to reserve the mark of GOT STRAPS in May, cleared the public opposition period, and received a Notice of Allowance from the Trademark Office in December.  Because this was only a reservation (called an “intent-to-use” application among IP attorneys), it had to submit a Statement of Use before the deadline, along with a specimen showing said use.  Guitar Straps dutifully filed its Statement and specimen, and then things unraveled.

The specimen they filed depicted the mark as GOT STRAPS? and was refused registration.

The trademark office viewed the additional question mark as a “material alteration,” requiring Guitar Straps to refile its application so it could be republished for the opposition as a “new” mark.  Guitar Straps appealed the refusal, but the Trademark Trial and Appeal Board stated that the question mark converted the word mark from a declarative sentence to an interrogative one, transforming the significance of the phrase sufficient to qualify as a “material alteration.”  Guitar Straps subsequently refiled for GOT STRAPS?.

Of course, this can happen with a trademark for any service or goods.  For example, beverages.  In Monster Energy Co. v. Consol. Distribs., Monster was initially granted a temporary restraining order and seizure of items allegedly infringing its famed M Claw.  Deputy U.S. Marshalls seized merchandise and business records.  But it was later discovered that Monster’s pertinent trademark was the M Claw with the words “Monster Energy,” beneath.  The TRO was lifted and the seized items were returned.

In its analysis, the Monster court acknowledged that “[b]ecause of business decisions and changing advertising schemes, a party’s mark may undergo changes over time. Such changes may occur without a party losing its priority in the mark if the change is ‘done in such a way that the continuing common element of the mark retains its impact and symbolizes a continuing impression.’”  The consumer should consider the original and subsequent mark to be the same.  This is called “tacking.”

Consequently, adding a question mark or deleting words are enough to cancel or abandon your trademark.  Before changing your mark as to font, color, elements—anything, you should assess whether you are implementing a material alteration. Even though Guitar Straps eventually obtained its mark in 2013, the LLC has been delinquent in its corporate filings since that year.  Archive.org’s Wayback Machine retrieves only “Error” pages for guitarstrapsonline.com since 2013.  In other words, something happened after this startup finally obtained its trademark.  It could be that the appeals and refiling with the Trademark Office left this burgeoning business strapped for cash.  Don’t change your trademark without speaking to IP counsel—please don’t hesitate to contact me at davefaux@dhf-law.net if you have any questions about changing your existing trademark.